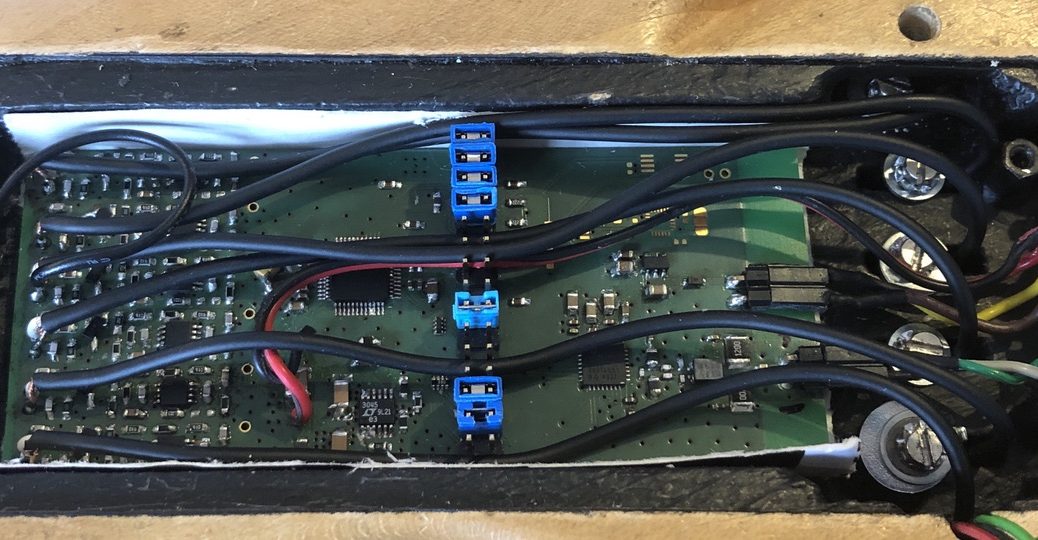 (Brezel is German for pretzel and it’s what the good folks at former citymusic, Karlsruhe mockingly called my guitar when they saw it the first time. Somehow the name stuck…)

As mentioned in my first post about the new guitar, one goal was to do the analog-to-digital conversion right inside the guitar, to cut noise and hum and other interferences to an absolute minimum.

I know that many guitar players are kinda strangely immune to the constant 50/60Hz buzz from their rig, but I hang out a lot with the Berlin echtzeitmusik scene where musicians often play so reduced, that any fridge or what-not gets disconnect before the show, so its ambient buzzes and gurgles don’t interfere with the music (except when the fridges are part of the line-up of course). There’s also certain experimental playing styles where I have to apply a lot of gain where it helps to have a super-low noise floor.

Converting a guitar to digital also means that one has to modify the whole system, including all the other guitars. So I decided to start this process with my old guitar, in order to gain some experience towards an optimized implementation for the new guitar. It’s also the guitar with the smallest compartment for the electronics, so I wanted to make sure the design would fit in there.

Here’s the analog & converter section of the board:

There’s a transistor stage that’s tuned for the high impedance input required by piezo pickups, followed by an OpAmp that does the proper conditioning of the signal towards the ADC inputs, like filtering and balancing. I picked the TI OPA2209 for its low noise floor of 2.2nV/sqrt(Hz).

The ADC is a Cirrus CS5366 which is their best multi-channel option. The CS5381 has better noise figures but it’s only stereo, so then I’d need 3 of them which introduces other problems. The situation for AKM chips is similar.

Finally, there’s the LT3045 regulator. Getting the power supply right is just as important as the chips in the signal chain, so I picked an ultra-low noise type with a high PSRR.

So how low could I get the noise in the end? Well, I don’t have professional audio measurement equipment, so take my numbers with a grain of salt. I simply ran the signal into a MaxMSP patch and fed it into an RMS meter. The lowest I could get was -108dB, which required quite some tweaking – at this level even 1cm of exposed, un-shielded cable picks up quite a bit of hum. I also gave the compartment a proper conductive coating at long last.
In any case that noise figure is close to the theoretical limit of 114dB that the CS5366 datasheet lists, so I stopped further tweakings for the time being

Converting the guitar signal to digital is of course only half of the job – you also need a way to send it across a cable. In the past I had used ADAT and MADI for multi-channel digital transmission. These days it’s all about Ethernet-based protocols like Dante and AES67. However, in the end I opted for an automotive protocol called A2B, which is easier to implement with a smaller PCB footprint:

It still requires (semi-) advanced PCB techniques, like impedance-matched signal routing. Still, with a ~50Mbaud data rate not half as complicated as Gbps-Ethernet (of course you can buy modules that do it for you, but those don’t fit in this guitar. They’re also expensive). A2B allows for “only” 32 signals on one bus, but that’s plenty for my current scenarios. It supports bi-directional communication which will come in handy for the new guitar where I also want to send signals back!

At the receiving end, things are not quite as cleaned up yet: the A2B transceiver is still on a perfboard that is patched into an MCH Streamer from MiniDSP which serves as the USB interface. Plus an extra Teensy to do configuration via I2C. Still lots of work ahead!