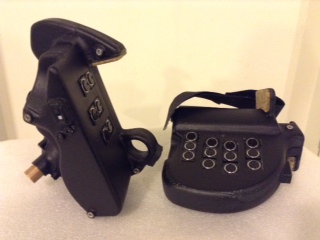 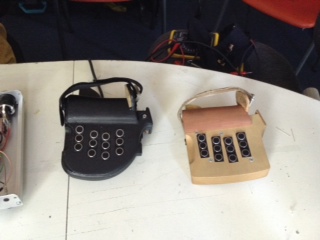 Max patch for cutting fast between to video streams in realtime.
Zé Bif is Jens Brand on video and Marcelo Aguirre on drums.

A DSP-based synthesizer that takes sensor input from a seismometer to generate a set of sine waves to drive transducers.

Sound modules for the walking sticks used by visitors of the “Speed of Light” project by NVA, Glasgow. Barometric and acceleration sensors control a small DSP that runs a composition by Chris Weaver of Resonance FM.

Added two pan potentiometers to a vanilla DJ mixer. Together with the cross-fader they form a square of four tap-to-ground pots.

Frank mostly does his own sensor controllers. Here I just helped him to connect it to a wireless Eobody interface.

Like “Berlin, Mitte der Welt” this is a spinoff of the G-Player series. As usual (some of) the sounds are a 1:1 interpretation of topographic data, this time imprinted on a vinyl disk that sits on top of an elaborate object that alludes to planetary motion. Above a chandelier-pendulum with a laser pointer “scratches” across the disk’s grooves which in turn is sonified and played back thru a rotating speaker, part of the above object.