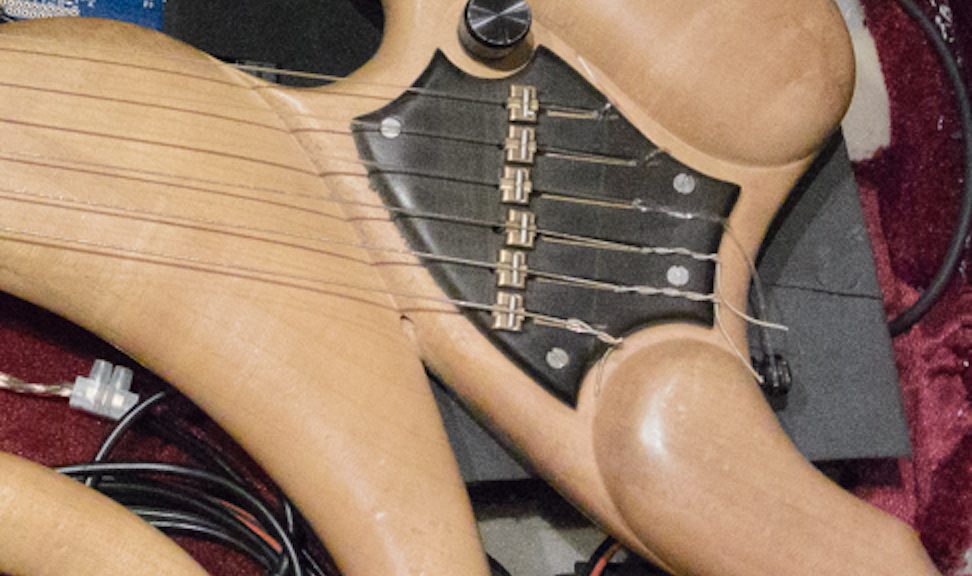 So I decided to build myself a new guitar.

Why?
I guess it can be summed up as an attempt to create a hybrid between my two current instruments and the playing styles associated with them, but also to use the opportunity to integrate as much guitar electronics as possible.

So for reference, here’s my solid-body nylon string that I build in the early 90s:

I built this because I wanted to play electric guitar in a band, but also apply my classical guitar education, i.e. finger nails on nylon strings. The latter don’t work with magnetic pickups of course, so piezo transducers had to be used. I first tried to mount them on a normal e-guitar, but didn’t like the tight string spacing. I also prefer the flat fretboard of classical guitars.

Back then, no one built guitars with this design approach and only later did I discover a small guitar company that had been doing this for a while: Paradis.
So without any previous woodworking skills but being the stubborn, determined guy that I am, I embarked on a mission that took me around two years to complete.

I don’t expect the new guitar to be done any faster.

Anyway, here’s my other axe, a 5-string Marathon bass:
(free beer for anyone who recognizes the logo on the sticker)

Like the nylon solid-body it is equipped with piezo pickups. Not that these were strictly necessary, but over the years I’ve come to love their particular sound.

One side-effect of using these piezos was that I “had to” make use of the fact that they provide a signal per string. In particular applying distortion to each channel separately before summing them (I still remember going to the local guitar store and plugging into 6 Fender amps :). These days polyphonic effect processing is of course at the core of my practice, both in my Ganzfeld and IMD duos.

So the new guitar will have these pickups as well.
But what will be new? What do I mean by hybrid?

Well, for one thing it will be a baritone guitar, i.e. between the standard E-tuning of a guitar and the bass an octave lower. I’m aiming for B-flat, not the least because both my duos are with trumpet players.

This tuning will also allow me to use wound strings across the board, as the highest frequency of 233.1 Hz should work fine with an 18 gauge string.
The reason I prefer wound strings these days is that they respond much better to the various experimental playing styles I typically use in my practice, wether it’s scratching the finger nails along the strings or applying various objects like bottle-necks or metal sponges.

However, from the nylon solid-body it will adopt the flat fretboard as well as the wide string spacing.

And with regards to the guitar electronics mentioned above I plan to include:
– preamps tailored for the high-impedance piezos
– analog-to-digital conversion
– fret-scanning
– sustainer
– on-board sound processing
– sensors for sound control
– acoustic transducers